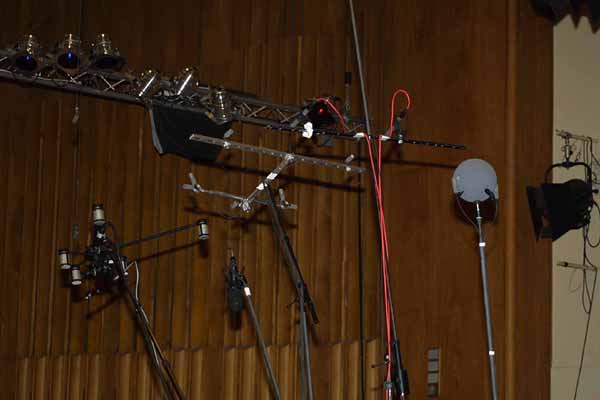 This early 5.1 microphone technioque shoot-out gained a lot of knowledge and until now, these audio samples (nicely made up as a DVD-Audio) are useful to compare diffferent approaches.

The recorded tracks are available for download as a DVD image in order to repeat the blindfolded listening test.

This DVD enables to intuitively compare by switching between the streams using the "Audio"-button of the DVD player remote.
The DVD was produced by John Oag, formerly IRT.

During the ORF Surround seminar and at an another later occasion the samples were compared in listening tests. The 18+14 participants had to assess different characteristics of these sound samples in a blind test. The results of these assessments are reproduced as mean values in 9 tables: Results of the Vienna and Düsseldorf Listening Tests

Listening test Vienna: Every setup was saved as a snapshot and then recalled according to a prepared order only known to the „master of ceremony“, Christian Sodl from ORF-Radio. One excerpt from the rehearsed works (Mozart + Berio), each approximately two minutes long was played with all seven systems. One complete test procedure therefore lasted about 40 minutes. 18 subjects (sound engineers) were divided into 6 testing groups (3 persons each). Each person could move around during listening.
A detailed paper about the listening test can be obtained here: F. Camerer: Classical Music in Radio and TV - a multichannel challenge
The Vienna test was performed by Florian Camerer and Christian Sodl, ORF. The diagrams were made by Helmut Wittek.

Details of the recording

The Decca-Tree and the Brauner ASM5 (an INA5 setup) were suspended right above the conductor at a height of 3,2m (the Decca-Tree a little bit higher at 4m with the center mic down 40cm). The Soundfield MKV was recessed 1m behind at the same height as the ASM5. Next came OCT at a height of 3.5m and 1.5m behind the conductor. Following in the line were the Stereo+C arrangement (2.5m behind and 4m above ground; the Center-omni 6m above ground) and the Schoeps KFM360 Surround as the furthermost system with a distance of 3.5m and a height of 3.6m. The Hamasaki Square was added to some configurations to reproduce the room information. The individual recordings were mixed and optimised according to taste by the relevant protagonists if present (Theile/Wittek for OCT and Gernemann for Stereo+C). The other systems were adjusted by participants with specific experience regarding one or the other system.

This table illustrates all systems: